Skip to content
Previous Next
You Say Tomato, I Say Shut Up. Or: How to Food Fight in Valencia

You Say Tomato, I Say Shut Up. Or: How to Food Fight in Valencia

The Tomatina festival is a massive food fight for adults. It occurs in a small town in Valencia (about four hours south of Barcelona) at the end of August.

Basically, the town carts in trucks upon trucks of tomatoes and – for one hour – anyone with a wristband and throwing arm can fling red veggies at one another.

Yes, I know that a tomato is a fruit, not a vegetable, but shut up, no one cares.

Put down the food pyramid and keep reading.

The history behind how all this started is a bit sketchy, but the general idea is that some people got into a food fight in the 40’s, had a blast, and decided to hit ‘repeat’ on the whole experience.

At first, the town counsel tried to shut it down.

But eventually, they were like, “Ya know, maybe we should make some money off this thing instead.”

Which is pretty brilliant if you ask me.

And now they have had their 70th anniversary.

A couple of daring and hyper-organized ESADE students put together a trip to the Tomatina festival and I soon found myself on a dusty street with oh-so-fashionable swimming goggles glued to my face.

The goggles were recommended, due to the amount of tomato juice.

If you look closely, you can see them dangling from my neck here (pic is pre-tomato throwing): 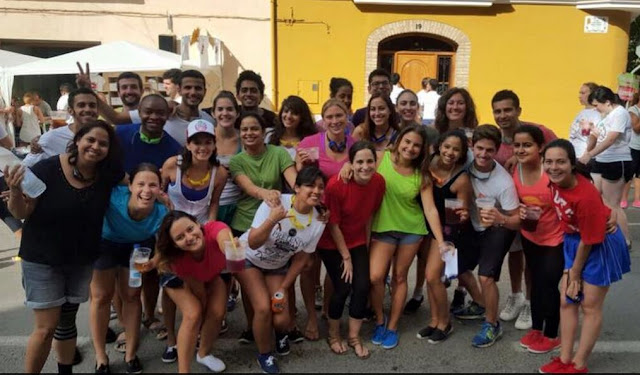 Before the tomato trucks rolled in, I followed the rest of the human cattle into the streets and wedged myself between a Caucasian man dressed as a ketchup bottle and an Asian chick with a “Sweet Fries” t-shirt (a pop-culture reference that I still do not understand).

It tickled me to see these two so close to each other since they clearly had not arrived together.

This may be the very definition of serendipity.

As we waited for the gong to ring and the trucks to arrive, I caught a foul wiff of sewage. I looked down and saw that I was standing over a storm drain.

I allowed the sea of bodies to press me forward into the mob and thought nothing more of the drain. Nor will you…for the moment.

The bell sounded and the trucks arrived.

Approximately, one every ten minutes.

The trucks were piled with tomatoes that would either be dumped into heaps in the crowd or flung from the belly of the trucks by the volunteers strapped to the sides.

The procession of the trucks was clever.

The crowd followed their movement as they headed to the outskirts of the town, like carrots being dangled just out of the reach of the rabbits.

It was effective in thinning the crowd and keeping us from trampling each other to death.

But I am an impatient lass and I did not feel like the tomatoes were coming to me and my friends fast enough.

So, I grabbed my roommate’s hand and dragged Juliana into the heart of the mob.

I soon discovered that the center of the pit was rowdy and boisterous. It would be easy to be knocked over.

Juliana is a delicate flower and I suddenly felt protective of her.

I shielded her as best I could with my man-hands and swimmer-shoulders…while also smashing a red vegetable into her face.

Then, I looked down and I realized that the crowd had pushed me back to the place where I had started this adventure.

Next to the foul-smelling sewage drain.

And people were scooping up tomato juices from the street with hands and cups.

And they were dumping it on us.

And some of it got in my mouth.

Fine, be that way.

My protective instincts over Juliana vanished.

F** this, that girl can take care of herself!!

I bolted out of there like a cat on a hot tin roof.

I don’t think I even touched the ground.

I may have levitated.

I spent the next 45 minutes watching the festivities from the safety of the sidelines, where the wise inhabitants of the town had been all along.

I looked for Juliana, but she had been swallowed up by the sea.

Last I heard, she was still alive.

Even though I only spent 15 minutes in the foray, I was still covered head to toe in tomatoes. The juice had soaked through my clothes and my underwear, and the sun was baking the foulness onto me like a crust.

Until then, I had no idea that tomatoes had a smell.

Oh, they most certainly do.

And it is horrible.

I had planned to take before-and-after pictures. But I was so desperate to Get. It. Off. Of. Me. that I was willing to forgo the obligatory Insta-photo and saved those mili-seconds in search of cleanliness instead.

As the final gong for Tomatina sounded, some of the neighbors brought out hoses and helped rinse down the people walking by, who accepted the water like manna from heaven.

I found Mary Magdalene and she rinsed my soul clean.

But not my hair.

As you can see from this photo, not even the virgin mother was going to get that sh*t clean without the help of some deep rinse shampoo: 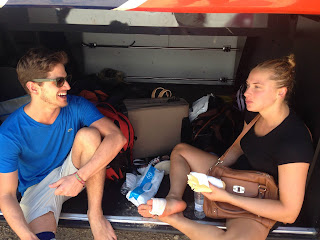 Upon the completion of Tomatina, almost all ESADE students agreed that it was a…”unique experience.” And we all know what that means.

I should note that some people enjoyed Tomatina.

Those people are not to be trusted.

I’m realizing that this story ended up being longer than originally planned. And, in fact, I could have saved myself some time because a co-student of mine has already summed up Tomatina more eloquently – and briefly – than I ever could:

Given the vile-ness of this story, it should come as no surprise that half of the Tomatina group – including myself – fell sick, immediately following the festivities.