Skip to content
Previous Next
Sobbing in Sandals. Or: How to Survive Spain for Six Days

Sobbing in Sandals. Or: How to Survive Spain for Six Days

I have been in Spain for six days. It has not been sunshine and rainbows.
Not that I was expecting it to be easy. I knew it would be tough.

But I thought my first days would be tough in a I-miss-my-family-and-friends way. Not in a everything-that-could-go-wrong-has-gone-wrong-dear-God-F-my-life way.

I had trouble with my student aid check, my Spanish bank account, and my NIE/TIE (second half of the visa process), just to name a few.

Meanwhile, I was navigating a foreign city without wifi or a smartphone because I had cut off service to my American cell phone provider.

After one particularly long day, my new roommate, Rachael, found me fighting back tears in front of my computer.

She gave me a pep talk and then said, “Maybe you shouldn’t check your emails when you’re exhausted and it’s 2am and you’re already emotionally vulnerable and have had a glass of wine…Maybe you should just go to bed.”

To make a long story short, my mom helped me through several things (and probably deserves a medal) and – while the stress still lingers – most of the issues are resolved or are in progress.

And since this blog is called “Humor in Heels,” not “Sobbing in Sandals,” I’d rather focus on some of the good/interesting things that happened:

My apartment is beautiful.

These pics are of the living room, dining room, and my bedroom. 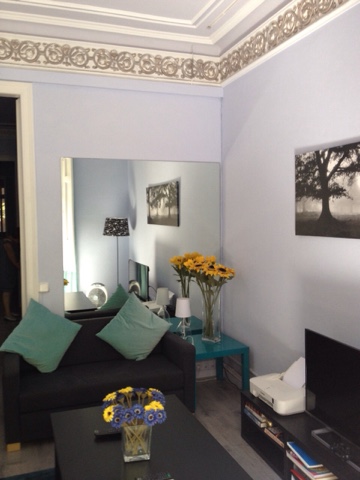 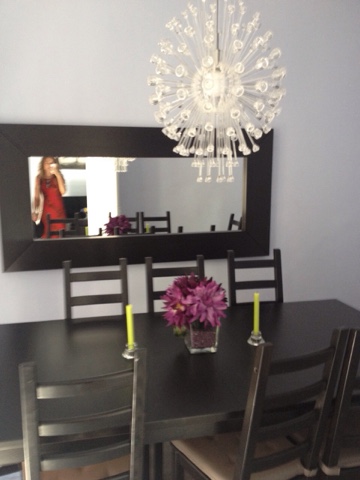 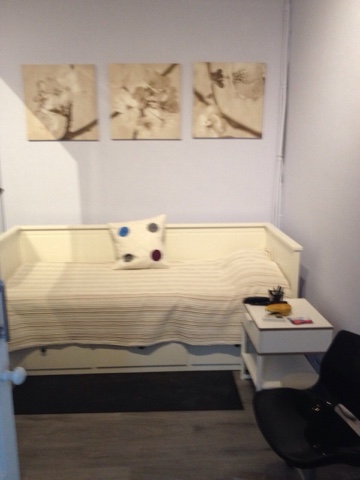 My roommates are awesome.

I have friends in the States who would consider me a go-getter and a bulldozer. But I am a lost lamb compared to this girl.

She has a concrete list of the things she wants to do with her life, but she won’t share it because she “doesn’t want to scare me yet.”
I’m pretty sure her list includes world domination.

Upon meeting her, it was immediately evident that Julianna was going to be the sweetheart of the group.
Although – come to think of it – that probably should have been obvious before we met her.
The “sweetheart” slot was clearly not going to land in my lap and I think Raxhael would agree that she could not bear the title either.
But even without a comparison to the strong-willed Racha/el’s, Juliana is obviously a sweetheart in her own right.
She had also been traveling with two friends before arriving in Barcelona. They stayed with us for a couple of days, which was really fun.

This pic is at the Magic Fountain. Rachael and Juliana are in white (Rachael is on the left). The guy is an ESADE student and the two other women are Juliana’s friends. 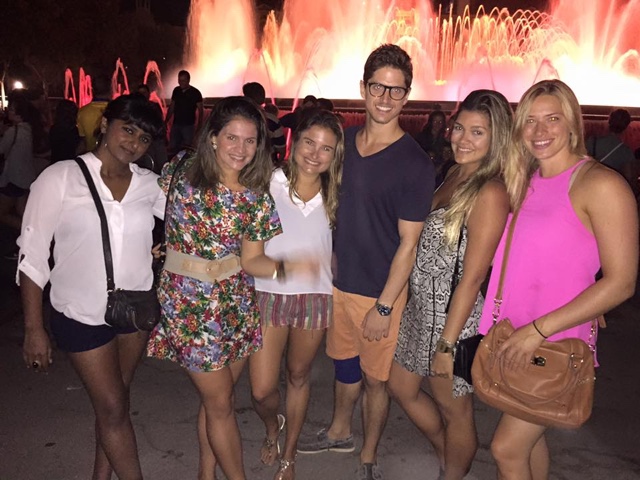 I went to the Magic Fountian.

The Magic Fountain is similar to Vegas: the water changes texture, height, and color, dancing to the music. It was beautiful and romantic.

I’ll upload video when I can. 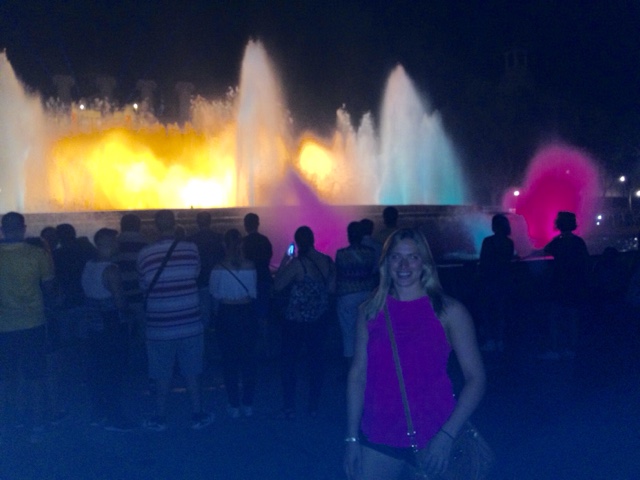 I Met Other ESADE Students

A large group of people went to Opium, a night club, and I met a large amount of ESADE students there’s the first time.

Unfortunately, due to pounding techno music and complicated name pronunciations, I actually have no idea who they are and will have to re-meet them later!

This is a pic of us that night. Do you like how I’m sticking out to the left like a sore thumb? 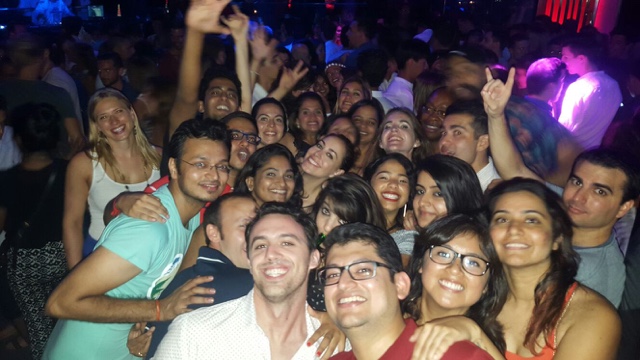 You need to buy water in Barcelona. This continues to blow my mind.

The city claims that the water from the tap is safe, but a couple of ESADE students tried it out and became ill.

I decided to pass on that particular experience.

I’m actually really curious to learn more about this water situation since it’s the biggest piece of culture shock that I’ve had this far.

In the States, I carried a water bottle around with me all of the time. Despite limited access to good water, no one seems to do that here.

Instead, they buy disposable water bottles from any of the many little shops along the street. And then they toss the plastic away.

I haven’t figured out why there isn’t a better, bigger solution to the problem. Perhaps I will learn more later.

My six days in Barcelona are complete. Now I am heading to Valencia and Ibiza for a trip with some of the other students.

Hopefully, luck/karma/divine intervention will turn the tide in my favor.