Skip to content
Next
I am a Goddess and You are an Unworthy Goat: Perils of a Summer Romance

I am a Goddess and You are an Unworthy Goat: Perils of a Summer Romance

Or: How to Avoid Thinking About Moving to Europe

I’ve been having a summer romance. He has a hot bod and a jet ski and I only see him on weekends.

Then, last week, he asked me out.

Our relationship had been born on the water – and ok, the dance floor, where Drunk Rachel (that classy broad) would periodically attack his face – and we had non-verbally agreed to never take this thing outside the confines of Crosslake.

Now, he was totally violating all of the rules of our relationship.

But…I said yes. I guess I like rule-breaking rebels.

I have to pause here because I just realized I cannot tell the rest of this story without giving this guy a name. So, I’ll give you a hint:

It rhymes with Kevin.

We texted throughout the week and confirmed the logistics for our date on Saturday.

When Saturday arrived, we exchanged a few texts in the afternoon and then…Kevin disappeared.

Aka: He stood me up.

I spent the evening on the couch, watching old re-runs of Law & Order and Criminal Minds with a large glass of red wine.

If that image gives you the impression of depression and ice cream, check yourself.  It was not self-pity. It was edification. I took notes on how to chop a man into a thousand little pieces and never get caught.

The next morning, when my emotions were back in my body, we had the following text exchange: 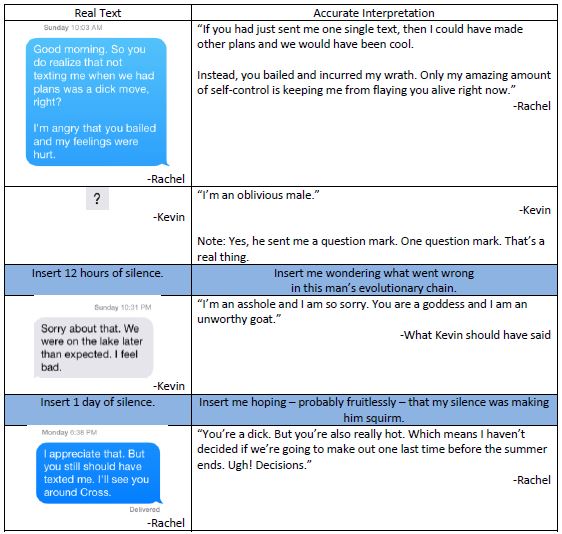 Obviously, this situation with my summer romance had been occupying the majority of my thoughts for over a week: First, getting excited and girly about the upcoming date; then, planning his demise after he stood me up; and finally, the aftermath of gossiping with my girlfriends about how even good guys can still act like tools.

Suffice to say, it was difficult to focus on anything else….like the fact that I’m moving to Europe in three weeks and am freaking out about it, for example.

So, Monday night – aka: the instant things were resolved with Kevin and there was space in my brain – I woke up in a cold sweat about moving to Spain. My brain raced with all of the things that were still open on my to-do list. I couldn’t go back to sleep and I ended up packing for two hours at 2am.

Through my semi-insomniac haze, I suddenly realized that that Kevin had done me a favor. Our summer romance – even this quick trip to douche bag town – had distracted me from my fears about moving abroad.

How’s that for a coping mechanism? Not bad, if I do say so myself.

I may even send him a thank-you card.