Skip to content
Previous Next
Fairest in the Land. Or: How to Rock Three Awesome Events

Fairest in the Land. Or: How to Rock Three Awesome Events

ESADE has been alive with activity the past few weeks. Here is a short list of the three most awesome events, explained with a fairytale flare:

Diwali is the “festival of lights,” a Hindu festival that’s celebrated every fall. It signifies the victory of light over darkness or good over evil.

The Indian students wanted to share this tradition with us, so they decided to organize a Diwali event for ESADE.

The organizers encouraged the female students to wear a sari, so I picked one up a few days before the event. Later that night, I did a trial-run on wrapping myself in it.

I spent about an hour drowning in fabric, yelling “How the hell does this thing turn into a dress?” And still, I had nothing to show for my efforts, except for third-degree fabric burns.

Thank heavens Shilpi offered to help me with it.

After she was done with me, I felt like a princess.

But, hey, a princess all the same. 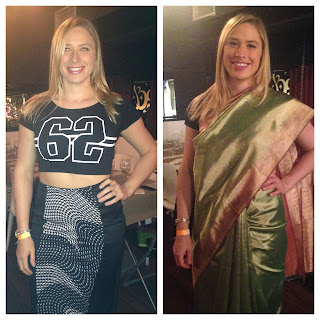 Before and After (Natasha told me that the sexiness of the sari comes from the midriff, which you can glimpse from the sides)

Diwali is a big event, so the Indian students had to work like hell to pull it off.

Their hard work really showed: We were treated to a series of fun and unique dances, Indian music, and delicious food.

They did a great job and everyone had an amazing night. Their hard work really showed: We were treated to a series of fun and unique dances, Indian music, and delicious food. Diwali is a big event, so the Indian students had to work like hell to pull it off. 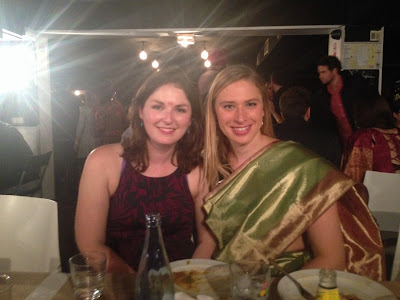 Anna and me, after some delicious Indian food

2) I Mustache You a Question: Where Did My Princes Go?

November is men’s health awareness month. Around the globe, men grow mustaches for “Movember” to raise donations for and to increase awareness of prostate and colon cancer.

The macho ESADE men have joined the cause.

In fact, they are competing with our rival school, IESE for the highest donations.

The cost of failure is high: If we lose, our reps have to wear shirts that say “I <3 IESE” – the horror!

Please help us avoid such a tragedy by donating here. 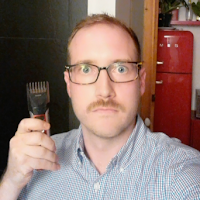 ESADE’s Movember is organized by this creep. 😉

Quite frankly, I’m looking forward to the last day of Movember. Right now, our class looks like a mesh of evil dictators and sex offenders.

3) Fairest in the Land: Jam Session

Our class is an oddly talented musical bunch.

It would be equally accurate to say that our class is ‘odd’ and ‘talented.’

Itsuma from Japan has started organizing “Jam Sessions” about every other month and they’re a big hit.

And then there’s also people like me who are brave/stupid enough to give it a try and have some fun. 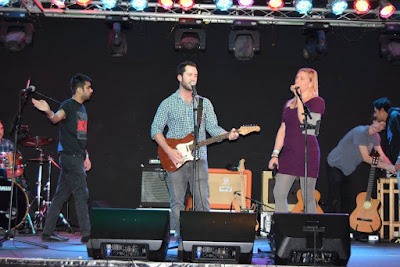 These evenings seem to have a pattern:

Everyone starts off shy and nervous and no one wants to get on stage. These evenings seem to have a pattern:

Then, a few hours later – and a few beers later – there is a queue for the mic.

By the end of the night, there are more people on stage than off of it.

The girls are singing an off-key version of If You Wanna Be My Lover by the Spice Girls. And the boys are yelling Bye Bye Bye by NSYNC at the top of their lungs while pantomiming 90’s boy band dance moves.

Aren’t we the fairest in the land?