Skip to content
Previous Next
Drag Racing Through the MBA. Or: How to Re-Adjust to MBA Life After the Holidays

Drag Racing Through the MBA. Or: How to Re-Adjust to MBA Life After the Holidays

Winter break in the States was amazing. It was heartwarming to see friends and family, but it was also bittersweet:

I wasn’t homesick until I got home.

Being surrounded by loved ones reminded me how much I missed them.

God, did I miss Target.

Aisles and aisles of everything I need.

And everything I don’t need…but end up buying anyway.

I also loved being home because I was able to hold my nephews for the first time. It was genuinely moving.

Touch is a powerful thing.

Given my mushy, missing-home feelings, the thought of returning to Spain was depressing.

I didn’t want to get on that plane.

In fact, I thought about not going back at all. But it turns out Delta does not refund tickets based on the premise of “But I don’t wannnnnna go!”

So, I got on that plane and flew across the Atlantic. I landed in Barcelona on a Friday morning and immediately I went to my afternoon class.

No, seriously. I went from the airport to school. I practically brought my bags with me.

After a relaxing holiday break, re-adjusting to MBA classes was like drag racing down the highway at 100 mph (or 160 kph for all of my crazy, metric-system peeps).

Hovering in the back of a Marketing class, I gripped the armrests of my chair while my hair got blown back by the force and speed of term two.

I can’t believe we have been back for an entire month. It has already gone incredibly fast.

Time is funny thing, especially in this MBA program.

It’s difficult to explain but I think my friend, Hugh, explained it best when he said:

So, let’s look back at January and quickly recap three cool things that happened during that month:

Sitges is a town near Barcelona. I went on a day-trip with some friends to check it out and we arrived just as the sun was setting. 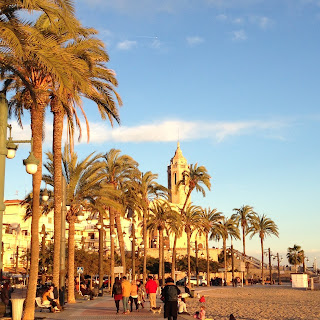 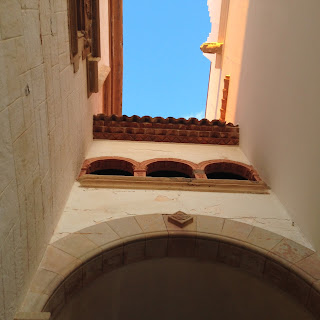 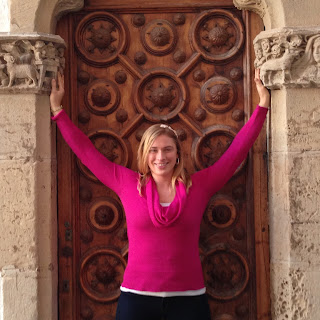 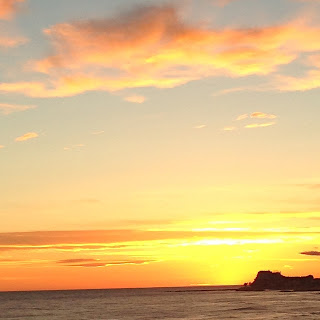 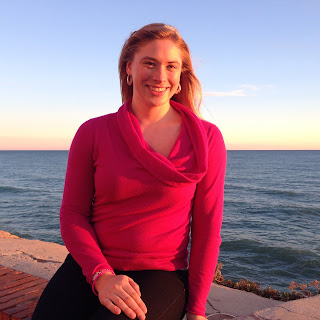 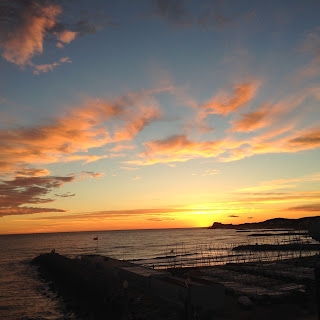 We had a great time in Sitges and some hilarious conversations, one of which included the phrase “Fur coat, no knickers.”

Apparently, that’s the Irish way of saying, “Rich but no class.”

It still makes me giggle.

That night, we had dinner in Sitges and Gareth decided he just had to have one more glass of wine…

…I say ‘Gareth’ because the rest of us were sober.

…and we missed the last train back to Barcelona.

The next train left at 4am.

So guess who took a cab all the way back to Barcelona?

Because we have fur coats.

And at least a few of us own knickers.

MBAT is a competition for international MBA schools. It’s hosted by HEC in Paris, in May.

Students form teams and compete in a variety of activities: like salsa, poker, chess, and football (re: soccer).

We have to sign up for MBAT now, then practice our sport, in order to be ready for the competition in May.

Despite a decent amount of athletic ability, I looked at the long list of sports and realized that I couldn’t do any of them.

Ok, I could have joined the salsa team.

Except for the fact that there were nine other women and four available spots.

And of those nine women, the majority were Latin.

So, I decided to learn a new sport: rock climbing.

For the past two weekends, I have organized a trip to an indoor rock climbing wall for a small group of ESADE students.

And it has been super, super fun.

The instructors are amazing. They teach us solid technique and then have us play games or make us race in order to implement what we’ve learned. So cool.

The only down side is that my muscles hate me the next morning.

My forearms and shoulder blades feel like they are she-hulking out of my flesh. 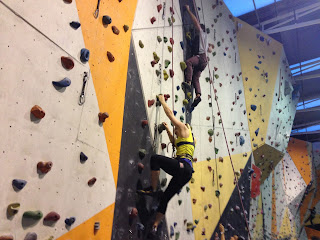 I have moved into a new flat and I absolutely love it. I have my own terrace, it’s two blocks from the station, and my roommates are native Spanish speakers.

I feel happy and at peace here.

Term two is very short. In fact, we are already half-way through it, which is weird.

But even weirder is the fact that we are actually half-way through the entire MBA program.

Soon, people will be off on their next adventure: an internship, exchange program, or career change.

I’m determined to enjoy every speedy moment that we’re here together.

After all, the MBA is a drag race.

And I’m loving the ride.