Skip to content
Previous Next
Boos and Booze. Or: How to Celebrate Halloween in Spain

Boos and Booze. Or: How to Celebrate Halloween in Spain

Halloween is my favorite holiday.

Playing dress-up as an adult?

That has “Rachel” written all over it.

I was not sure how they celebrated Halloween in Spain and I was a bit concerned about figuring that out.

But I should not have been worried: the second year students had my back.

They organized a party, delicately called the “69 Halloween Party.”

They bought a ridiculous amount of alcohol and rented a castle…yes, a castle…in the middle of the mountains.

Francisco repeatedly warned me to bring a jacket because it gets “cold” in the mountains.

I’ve worn booty shorts and high heels in snow drifts during Halloween…explain to me again how 60 degrees is cold?!

On the morning of Halloween, my mom had sent me a text, reminding me to be safe.

So, with her concerns in mind, I requested an agenda from the party-planners, which they were happy to provide. It looked something like this:

1am: Heated discussion about the philosophy of Plato

2am: Quidditch game (teams determined by the Sorting Hat)

4am: Lecture on the Evolution of the Calculator

*Punch and light appetizers will be served.

I was rather alarmed by the suggestion of a “heated discussion.” That sounded like it had the potential to get wild and rowdy.

But otherwise, I thought my mother would approve.

And the Quidditch game sounded fun. So, I gave myself the green light to go to the party. 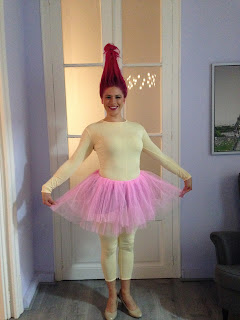 They see me trollin’, they hatin’…

That night, I put on my costume in my apartment and then stepped outside.

People immediately started waving and honking at me on the street.That night, I put on my costume in my apartment and then stepped outside.

It was like they had never seen a troll doll before. Gosh.

A half-hour cab ride later, I was at the party and everyone wanted to touch my hair and take their picture with me.

I really hadn’t expected my outfit to get that much attention. I felt like a celebrity.

Because, you know, I hate attention.

The party was perfect – from the terrace to the DJ to the lighting. Just totally awesome.

Admittedly, I was a bit apprehensive about the party in the beginning.

I mean, you are throwing together hyped-up MBA students with alcohol, disguises, mood lighting, and a mentality of what-happens-in-the-castle-stays-in-the-castle.

Or a recipe for lots and lots of juicy gossip.

In fact, I’m willing to bet that half of the people on this blog are reading it to find out who hooked up with who.

But the truth is that I was having too much fun to notice or care.

And the other truth is that if I blasted like, “Wonder Woman Made Out with Darth Vader” on a blog, someone would probably torch my gym locker.

And I really love my gym locker.

So, I had several glasses of…er…punch…and danced.

A few hours later – and a few glasses later – I began to have really engaging conversations with my fellow students.

Most of the conversations went one of two ways:

Convo Option #1: Sing Me the Barney Song, Everyone Loves Everyone

Me: Ohmygod, I love you.

Them: No, you’re awesome.

Me: Ohmygod…wait, yes, tell me more.

Them: How did you get your hair to look like that?

Me: There’s a plastic water bottle inside.

Me: Yeah, it’s amazing what fourteen year-old girls on YouTube can teach you.

Them: The color is amazing. You should have been born with pink hair.

Me: I know, right? I think God really messed up on that one.

Eventually, 6am rolled around…yes, 6am…and I had to take the last shuttle home to Barcelona.

And this has the same ending as my last story: I immediately fell asleep in a decidedly awkward position, even before the bus started moving.

So, I don’t remember that half hour of the night…

…which is more than I can say for some people.

Pics have now hit Facebook and only a few of them are scandalous, which makes me raise an eyebrow because I am sure there are more.

So, I contacted Nick, our photographer, and requested access to the blackmail file.

But I’m not the kind of woman who takes no for an answer, so I figure we’re still in negotiations.

Plus, I really want to see his pics of the Quidditch game.