Awkward Pigeon and the Curse of Hot Homegirls. Or: How to Adjust to New Life and Make Friends in Spain

Throughout my life, I have been uncommonly blessed with good friends.

Hmm, let’s run the numbers and find out.

Girl friends enhance my “cheerleader effect” at the bar.

aka: My friends are smokin’ hot and I become more attractive by association.

That’s not my opinion, that’s science.

And God bless science because men flock towards us like moths to a flame. 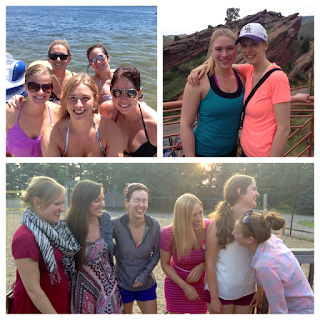 Unfortunately, as soon as the aforementioned gentlemen step forward, they quickly realize that I’m the awkward turtle of the group.

I walked into a wall yesterday.

If I had been able to get away with it – escape unscathed and unseen by anyone – I would not have been embarrassed. I would have just walked away like nothing happened. La la la.

That wall was made of glass.

And there were people on the other side.

And they watched as I walked into it like a freaking pigeon, slamming itself into a window.

So maybe I’m not an awkward turtle.

But either way, the men quickly realize that they have several other socially-adept unicorns near me to choose from instead, and they move on.

When you spend your entire life surrounded by close friends, moving to another country becomes much more challenging because you’re used to a strong support system.

Suddenly, I have been plopped into a foreign land where I have to make new friends.

Obviously, I’ve continued to make new friends throughout my life. The skill is not completely foreign to me.

But this time I am starting at ground zero.

And that’s much harder.

Think about it: In the States, there was no pressure around making new friends because I already had a gangsta troop of bia’s.

So, if the new person didn’t like me, NBD, their loss. I’ve got other homies backin’ me up with some love from my hood.

But in Spain, I’m walking around like, “Looooove me, looooove me! Saaaaaaaay that you love me.”

Except that I try to keep the singing to a minimum because…well, ya know…awkward pigeon.

So, how does a person go about making new friends in a foreign land?

I have pondered this over a carton of chocolate ice cream – the cardboard soaked with tears – and I have come up with three answers.

But it turns out that running around your neighborhood, screaming, “It’s been five whole days, where are my BFF’s!?!?” at that top of your lungs does not work.

Much to my surprise.

So, let’s stick with three.

Juliana and Guilherme are Brazilians. And they are living with me.

Juliana is my real roommate.

Guilherme is a homeless boy that we kidnapped off the cold, hard streets of Eixample.

Ok, he’s only homeless for a few more days. But still.

I’m working on building an extra bedroom to convince him to stay.

I’ve bonded with Ju and Gui because of close proximity.

And also because – frankly – it’s hard not to bond with people who give you hugs and compliments. xo.

Three guys (a German, a Brazilian, and an Italian) live near us and they invited me, my roomies, and a few other people over for dinner.

The small size of the party was a relief.

Frankly, the sheer volume of all-ESADE-student get-togethers – combined with my uncertainty of everyone’s name – has been daunting

The reduced size allowed me to relax.

Summary of that night:

The Brazilian played the guitar.

And the Italian kindly yelled at the neighbors to please get off our backs, from the fourth story of the building.

Further summary: It was a lovely evening. 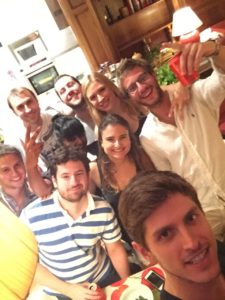 Francisco is a second year student at ESADE. We had a couple of random conversations that turned into him offering to show me around Barcelona.

We went past the Goudi buildings, the Cathedral, and several other landmarks. He also explained how each Barcelona neighborhood is different and distinguishable (Raval vs Born vs Gotico, etc).

Then, we met up with Nick, another second year student, for “tapas” – which is Spanish for “a small amount of food and a hell of a lot of wine.”

He swears as much as I do and tells wildly inappropriate jokes. 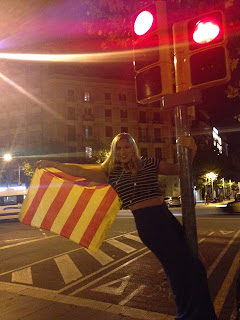 It was a Catalonian holiday and I insisted that Francisco take this pic. Nick said, “Ugh. Americans and their poles, am I right?!” …which I found very, very funny. A few of you will understand why. #insidejoke

This turned out to be my favorite day in Barcelona thus far. I wish I had the eloquence to describe it. The vibe, the weather, and the ease.

I also wish I could explain how wonderful and comfortable it was to hang out with Francisco and Nick, even though we had just met.This turned out to be my favorite day in Barcelona thus far. I wish I had the eloquence to describe it. The vibe, the weather, and the ease.

Actually, I probably could explain it, but I won’t. There is an off-chance that they read my blog and they would either roll their eyes or puke.

So, I’ll skip over the mush.

But I will say this:

It’s funny how things work out.

Connecting with Francisco and Nick that evening was poignant for me because, just that morning, I had been missing home for the first time.

Missing my family, my nephews…and even my hot homegirls.

So, I appreciate the friends that I have made thus far in Spain, especially those that can handle my awkward pigeon.