Skip to content
Previous Next
Andorra: Snowboarding in a Foreign Country

Andorra: Snowboarding in a Foreign Country

Andorra is a small country nestled between Spain and France. It’s best known for mountains, snow, and the Grandvalira Ski Resort.

…if Powder Ridge was massive, awesome, and could compete with the Alps.

Grandvalira dominates the majority of Andorra. In fact, economically speaking, there’s no real difference between Grandvalira and the country itself. The ski resort is that big.

I have now been to Andorra/Grandvalira twice:

Trip #1: The Road Trip from Hell

My first trip to Andorra was spurred by a three-day weekend in February.

Chloe organized the trip and we combined forces with the ESADE BA students in order to minimize costs for travel and lodging.

Actually, I had thought they were going to be masters students.

I found this MBA/MsC combination thrilling because I envisioned a fun-filled weekend of me chasing the cute ones, yelling, “Hey, baby, can I get yo digits?!”

You can imagine my shock and confusion when a group of twelve year-olds got on the bus.

I am not an expert snowboarder. Far from it. In fact, I just learned to snowboard last winter.

But thanks to some epic teachers (whaaaat up, Dan and Joe?!) and hard-core balancing skillz (re: dance practice), I can snowboard at an Intermediate level.

Unfortunately, the people on this trip were clearly divided between Low Beginner and Super Advanced.

Low Beginner: “Hi, my name is Brazil/India and I’ve never seen snow before.”

Super Advanced: “Hi, my name is Germany/Poland and if you don’t ski, it’s because your family has disowned you. I pity you, Poor Orphan Child, but I must join in ostracizing you from society.”

So, I was literally the only Intermediate person on the trip.

Not wanting to snowboard alone, I decided to join the Super Advanced group.

Which worked out well.

Because, as I mentioned before, Grandvalira is huge. Massive, even. This means that the slopes are incredibly long, which is both delightful and excruciating.

‘Delightful’ because you cannot imagine the beauty of these mountains. I took a hundred pictures but none could capture their magnitude.

‘Excruciating’ because I had neither the talent, nor the physical ability to manage lengthy slopes.

The Super Advanced group was kind enough to occasionally pause and wait for me, but at one point, I collapsed in the middle of a run, curled into the fetal position, and cried like a dying whale.

Johannes returned to fetch me and, as part of his rescue mission, he attached forced me to grab the end of one of his ski poles so that he could drag me to the end of the slope.

Because apparently – while I was struggling to simply complete the damn run – Johannes had enough energy to ski it, return to get me, and then ski the rest of the way back while dragging my dead weight behind him.

On Sunday, I pulled my sore and crippled body onto the coach bus with the call-me-in-ten-years BA students and settled in for the three hour drive…So, I struggled to keep up with the Super Advanced group for three days, then it was time to return to Barcelona.

…which turned out to be an eight hour drive.

Let me repeat that: A f***ing eight hour drive!

The holiday weekend had pulled in a lot of families, which meant a lot of traffic. Plus, Andorra is a country, which means customs regulations. Which means every friggin’ vehicle had to stop and pass inspection.

Fernando pulled out live Google Maps and me how we had gone four miles…in four hours.

To make matters worse, these BA students clearly hadn’t been smacked around by their parents enough when they were kids because they had missed the lesson about covering your mouth when you cough.

So, I spent eight hours in a metal tube with re-circulated air, my neck betting tickled by the disease-ridden cough of the BA student sitting behind me.

I must be a masochist because I decided to go to Andorra again, one month later.

This time, the trip was organized by the Operations group (of which I am not a member, except for this weekend when the Prez allwowed me to be an “honorary member”).

Although we went to the same place, this trip was a completely different experience. 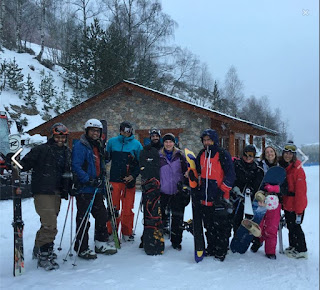 We met with the Operations Director of Grandvilera and he gave us a presentation that touched on: the safety and cost of the lifts, their competitive advantage vs the Alps, how the profits are split between two founding companies that had merged, and how the industry is reacting to climate change.We went skiing during the day, as usual, but then we had operations activities as well.

Maybe the MBA is turning me into a huge nerd, but I thought the whole thing was fascinating.

Then, Piedade scheduled a private tour with a guide for Sunday morning. This meant that we got to hit the slopes an hour before the general public.

Essentially, we had the mountain to ourselves.

Plus, it had snowed the night before, giving us a foot of white, fluffy powder.

Imagine skiing down a mountainside in morning silence, white powder spraying up behind you in a cloud as you cut through the slope.

So, take it from me: Snowboarding in Andorra is both delightful and excruciating.